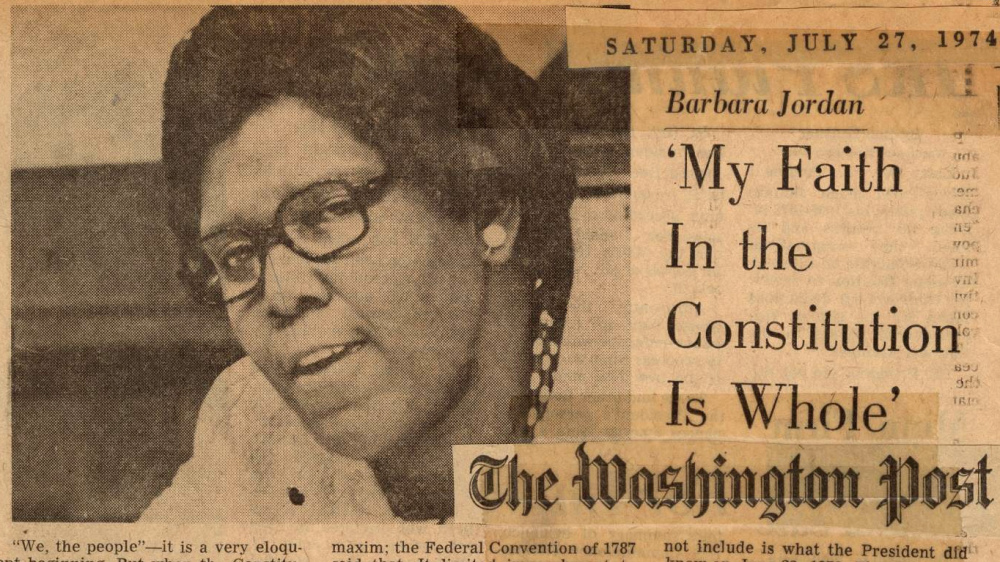 Representative Barbara Jordan of Texas delivered the following remarks on both the U.S. Constitution and the potential impeachment of Richard Nixon in a televised address before the U.S. House Judiciary Committee on July 25, 1974.

Mr. Chairman, I join my colleague Mr. Rangel in thanking you for giving the junior members of this committee the glorious opportunity of sharing the pain of this inquiry.

Mr. Chairman, you are a strong man, and it has not been easy but we have tried as best we can to give you as much assistance as possible.

Earlier today we heard the beginning of the Preamble to the Constitution of the United States, “We, the people.” It is a very eloquent beginning. But when that document was completed, on the seventeenth of September in 1787, I was not included in that “We, the people.” I felt somehow for many years that George Washington and Alexander Hamilton just left me out by mistake. But through the process of amendment, interpretation, and court decision I have finally been included in “We, the people.”

Today I am an inquisitor. I believe hyperbole would not be fictional and would not overstate the solemnness that I feel right now. My faith in the Constitution is whole, it is complete, it is total. I am not going to sit here and be an idle spectator to the diminution, the subversion, the destruction of the Constitution.

“Who can so properly be the inquisitors for the nation as the representatives of the nation themselves?” “The subject of its jurisdiction are those offenses which proceed from the misconduct of public men.” (Federalist, no. 65.) That is what we are talking about. In other words, the jurisdiction comes from the abuse of violation of some public trust. It is wrong, I suggest, it is a misreading of the Constitution for any member here to assert that for a member to vote for an article of impeachment means that that member must be convinced that the president should be removed from office. The Constitution doesn’t say that.

The powers relating to impeachment are an essential check in the hands of this body, the legislature, against and upon the encroachment of the executive. In establishing the division between the two branches of the legislature, the House and the Senate, assigning to the one the right to accuse and to the other the right to judge, the framers of this Constitution were very astute. They did not make the accusers and the judges the same person.

We know the nature of impeachment. We have been talking about it awhile now. “It is chiefly designed for the president and his high ministers” to somehow be called into account. It is designed to “bridle” the executive if he engages in excesses. “It is designed as a method of national inquest into the public men.” (Hamilton, Federalist, no. 65.). The framers confined in the congress the power if need be, to remove the president in order to strike a delicate balance between a president swollen with power and grown tyrannical, and preservation of the independence of the executive.

The nature of impeachment is a narrowly channeled exception to the separation-of-powers maxim; the federal convention of 1787 said that. It limited impeachment to high crimes and misdemeanors and discounted and opposed the term “maladministration.” “It is to be used only for great misdemeanors,” so it was said in the North Carolina ratification convention. And in the Virginia ratification convention: “We do not trust our liberty to a particular branch. We need one branch to check the others.”

The North Carolina ratification convention: “No one need be afraid that officers who commit oppression will pass with immunity.”

“Prosecutions of impeachments will seldom fail to agitate the passions of the whole community,” said Hamilton in the Federalist Papers, no. 65. “And to divide it into parties more or less friendly or inimical to the accused.” I do not mean political parties in that sense.

The drawing of political lines goes to the motivation behind impeachment; but impeachment must proceed within the confines of the constitutional term “high crimes and misdemeanors.” Of the impeachment process, it was Woodrow Wilson who said that “nothing short of the grossest offenses against the plain law of the land will suffice to give them speed and effectiveness. Indignation so great as to overgrow party interest may secure a conviction; but nothing else can.”

Common sense would be revolted if we engaged upon this process for insurance, campaign finance reform, housing, environmental protection, energy sufficiency, mass transportation. Pettiness cannot be allowed to stand in the face of such overwhelming problems. So today we are not being petty. We are trying to be big because the task we have before us is a big one.

This morning, in a discussion of the evidence, we were told that the evidence which purports to support the allegations of misuse of the CIA by the president is thin. We are told that that evidence is insufficient. What that recital of the evidence this morning did not include is what the president did know on June 23, 1972. The president did know that it was Republican money, that it was money from the Committee for the Re-Election of the President, which was found in the possession of one of the burglars arrested on June 17.

We were further cautioned today that perhaps these proceedings ought to be delayed because certainly there would be new evidence forthcoming from the president. The committee subpoena is outstanding, and if the president wants to supply that material, the committee sits here.

The fact is that yesterday, the American people waited with great anxiety for eight hours, not knowing whether their president would obey an order of the Supreme Court of the United States. At this point I would like to juxtapose a few of the impeachment criteria with some of the president’s actions.

Impeachment criteria: James Madison, from the Virginia ratification convention. “If the president be connected in any suspicious manner with any person and there be grounds to believe that he will shelter him, he may be impeached.”

We have heard time and time again that the evidence reflects payment to the defendants of money. The president had knowledge that these funds were being paid and that these were funds collected for the 1972 presidential campaign. We know that the president met with Mr. Henry Petersen twenty-seven times to discuss matters related to Watergate and immediately thereafter met with the very persons who were implicated in the information Mr. Petersen was receiving and transmitting to the president. The words are “if the president be connected in any suspicious manner with any person and there be grounds to believe that he will shelter that person, he may be impeached.”

Justice Story: “Impeachment is intended for occasional and extraordinary cases where a superior power acting for the whole people is put into operation to protect their rights and rescue their liberties from violations.”

We know about the Huston plan. We know about the break-in of the psychiatrist’s office. We know that there was absolute complete direction in August 1971 when the president instructed Ehrlichman to “do whatever is necessary.” This instruction led to a surreptitious entry into Dr. Fielding’s office. “Protect their rights.” “Rescue their liberties from violation.”

The South Carolina ratification convention impeachment criteria: those are impeachable “who behave amiss or betray their public trust.” Beginning shortly after the Watergate break-in and continuing to the present time, the president has engaged in a series of public statements and actions designed to thwart the lawful investigation by government prosecutors. Moreover, the president has made public announcements and assertions bearing on the Watergate case which the evidence will show he knew to be false.

The Constitution charges the president with the task of taking care that the laws be faithfully executed, and yet the president has counseled his aides to commit perjury, willfully disregarded the secrecy of grand jury proceedings, concealed surreptitious entry, attempted to compromise a federal judge while publicly displaying his cooperation with the processes of criminal justice.

“A president is impeachable if he attempts to subvert the Constitution.”