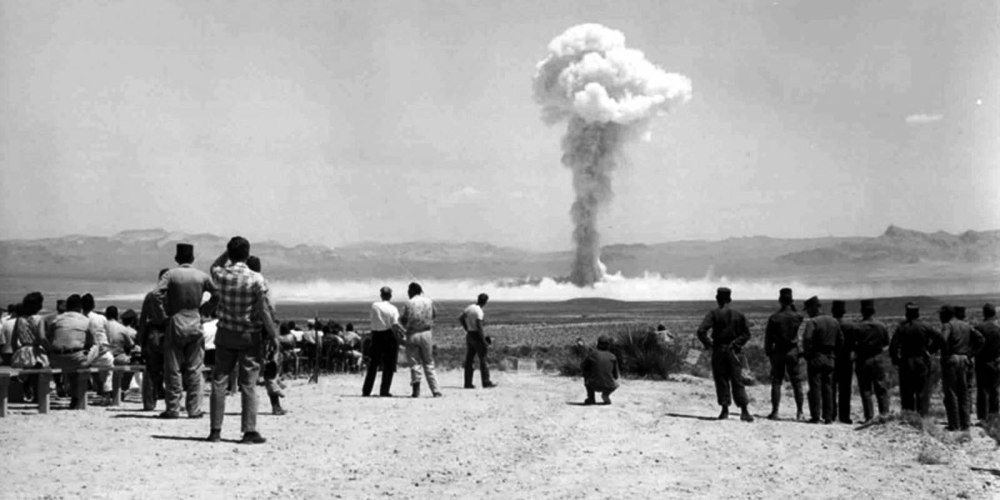 *The American Yawp is an evolving, collaborative text. Please click here to improve this chapter.*

¶ 3 Leave a comment on paragraph 3 2 Relations between the United States and the Soviet Union—erstwhile allies—soured soon after World War II. On February 22, 1946, less than a year after the end of the war, the chargé d’affaires of the U.S. embassy in Moscow, George Kennan sent a famously lengthy telegram—literally referred to as the Long Telegram—to the State Department denouncing the Soviet Union. “World communism is like a malignant parasite which feeds only on diseased tissue,” he wrote, and “the steady advance of uneasy Russian nationalism . . . in [the] new guise of international Marxism . . . is more dangerous and insidious than ever before.” ((Kennan to Secretary of State, February 22, 1946, in Foreign Relations of the United States 1946, Vol. 6 (Washington, DC: U.S. Government Printing Office, 1969), 696–709, 708, 700.)) There could be no cooperation between the United States and the Soviet Union, Kennan wrote. Instead, the Soviets had to be “contained.” Less than two weeks later, on March 5, former British prime minister Winston Churchill visited President Harry Truman in his home state of Missouri and declared that Europe had been cut in half, divided by an “iron curtain” that had “descended across the Continent.” ((Martin McCauley, Origins of the Cold War 1941-49: Revised 3rd Edition (New York: Routledge, 2013), 141.)) Aggressive anti-Soviet sentiment seized the American government and soon the American people. ((For Kennan, see especially John Lewis Gaddis, George F. Kennan: An American Life (New York: Penguin, 2011); John Lukacs, ed., George F. Kennan and the Origins of Containment, 1944–1946: The Kennan-Lukacs Correspondence (Columbia: University of Missouri Press, 1997).))

¶ 4 Leave a comment on paragraph 4 2 The Cold War was a global political and ideological struggle between capitalist and communist countries, particularly between the two surviving superpowers of the postwar world: the United States and the Union of Soviet Socialist Republics (USSR). “Cold” because it was never a “hot,” direct shooting war between the United States and the Soviet Union, the generations-long, multifaceted rivalry nevertheless bent the world to its whims. Tensions ran highest, perhaps, during the first Cold War, which lasted from the mid-1940s through the mid-1960s, after which followed a period of relaxed tensions and increased communication and cooperation, known by the French term détente, until the second Cold War interceded from roughly 1979 until the collapse of the Berlin Wall in 1989 and the dissolution of the Soviet Union in 1991. The Cold War reshaped the world and the generations of Americans that lived under its shadow.

¶ 6 Leave a comment on paragraph 6 2 The Cold War grew out of a failure to achieve a durable settlement among leaders from the Big Three Allies—the United States, Britain, and the Soviet Union—as they met at Yalta in Russian Crimea and at Potsdam in occupied Germany to shape the postwar order. The Germans had pillaged their way across Eastern Europe, and the Soviets had pillaged their way back. Millions of lives were lost. Stalin considered the newly conquered territory part of a Soviet sphere of influence. With Germany’s defeat imminent, the Allies set terms for unconditional surrender. At the same time, deliberation began over reparations, tribunals, and the nature of an occupation regime that would initially be divided into American, British, French, and Soviet zones. Suspicion and mistrust were already mounting. The political landscape was altered drastically by Franklin Roosevelt’s sudden death in April 1945, just days before the inaugural meeting of the UN. Although Roosevelt was skeptical of Stalin, he always held out hope that the Soviets could be brought into the “Free World.” Truman, like Churchill, had no such illusions. He committed the United States to a hard-line, anti-Soviet approach. ((Harbutt, Yalta 1945).))

¶ 7 Leave a comment on paragraph 7 1 At the Potsdam Conference, held on the outskirts of Berlin from mid-July to early August, the Allies debated the fate of Soviet-occupied Poland. Toward the end of the meeting, the American delegation received word that Manhattan Project scientists had successfully tested an atomic bomb. On July 24, when Truman told Stalin about this “new weapon of unusual destructive force,” the Soviet leader simply nodded his acknowledgment and said that he hoped the Americans would make “good use” of it. ((Herbert Feis, Between War and Peace: The Potsdam Conference (Princeton, NJ: Princeton University Press, 1960).))

¶ 8 Leave a comment on paragraph 8 0 The Cold War had long roots. The World War II alliance of convenience was not enough to erase decades of mutual suspicions. The Bolshevik Revolution had overthrown the Russian tsarists during World War I. Bolshevik leader Vladimir Lenin urged an immediate worldwide peace that would pave the way for world socialism just as Woodrow Wilson brought the United States into the war with promises of global democracy and free trade. The United States had intervened militarily against the Red Army during the Russian Civil War, and when the Soviet Union was founded in 1922 the United States refused to recognize it. The two powers were brought together only by their common enemy, and without that common enemy, there was little hope for cooperation. (((For overviews of the Cold War, see especially John Lewis Gaddis, Strategies of Containment: A Critical Appraisal of Postwar American National Security Policy (New York: Oxford University Press, 1982); John Lewis Gaddis, The Cold War: A New History (New York: Penguin, 2005); Melvyn P. Leffler, For the Soul of Mankind: The United States, the Soviet Union, and the Cold War (New York: Hill and Wang, 2007); and Frederick Logevall, America’s Cold War: The Politics of Insecurity (Cambridge, MA: Harvard University Press, 2009).))

¶ 9 Leave a comment on paragraph 9 1 On the eve of American involvement in World War II, on August 14, 1941, Roosevelt and Churchill had issued a joint declaration of goals for postwar peace, known as the Atlantic Charter. An adaptation of Wilson’s Fourteen Points, the Atlantic Charter established the creation of the United Nations. The Soviet Union was among the fifty charter UN member-states and was given one of five seats—alongside the United States, Britain, France, and China—on the select Security Council. The Atlantic Charter also set in motion the planning for a reorganized global economy. The July 1944 UN Financial and Monetary Conference, more popularly known as the Bretton Woods Conference, created the International Monetary Fund (IMF) and the forerunner of the World Bank, the International Bank for Reconstruction and Development (IBRD). The Bretton Woods system was bolstered in 1947 with the addition of the General Agreement on Tariffs and Trade (GATT), forerunner of the World Trade Organization (WTO). The Soviets rejected it all.

¶ 10 Leave a comment on paragraph 10 1 Many officials on both sides knew that the Soviet-American relationship would dissolve into renewed hostility at the end of the war, and events proved them right. In 1946 alone, the Soviet Union refused to cede parts of occupied Iran, a Soviet defector betrayed a Soviet spy who had worked on the Manhattan Project, and the United States refused Soviet calls to dismantle its nuclear arsenal. In a 1947 article for Foreign Affairs—written under the pseudonym “Mr. X”—George Kennan warned that Americans should “continue to regard the Soviet Union as a rival, not a partner,” since Stalin harbored “no real faith in the possibility of a permanent happy coexistence of the Socialist and capitalist worlds.” He urged U.S. leaders to pursue “a policy of firm containment, designed to confront the Russians.” ((George Kennan, “The Sources of Soviet Conduct,” Foreign Affairs (July 1947), 566–582.))

¶ 11 Leave a comment on paragraph 11 0 Truman, on March 12, 1947, announced $400 million in aid to Greece and Turkey, where “terrorist activities . . . led by Communists” jeopardized “democratic” governance. With Britain “reducing or liquidating its commitments in several parts of the world, including Greece,” it fell on the United States, Truman said, “to support free peoples . . . resisting attempted subjugation by . . . outside pressures.” ((Joyce P. Kaufman, A Concise History of U.S. Foreign Policy (Lanham, MD: Rowman and Littlefield, 2010), 86.)) The so-called Truman Doctrine became a cornerstone of the American policy of containment. ((Denise M. Bostdorff, Proclaiming the Truman Doctrine: The Cold War Call to Arms (College Station: Texas A&M University Press, 1998).))

¶ 12 Leave a comment on paragraph 12 0 In the harsh winter of 1946–1947, famine loomed in much of continental Europe. Blizzards and freezing cold halted coal production. Factories closed. Unemployment spiked. Amid these conditions, the communist parties of France and Italy gained nearly a third of the seats in their respective parliaments. American officials worried that Europe’s impoverished masses were increasingly vulnerable to Soviet propaganda. The situation remained dire through the spring, when secretary of state General George Marshall gave an address at Harvard University on June 5, 1947, suggesting that “the United States should do whatever it is able to do to assist in the return of normal economic health to the world, without which there can be no political stability and no assured peace.” ((Michael Beschloss, Our Documents: 100 Milestone Documents from the National Archives (New York: Oxford University Press, 2006), 199.)) Although Marshall had stipulated to potential critics that his proposal was “not directed against any country, but against hunger, poverty . . . and chaos,” Stalin clearly understood this as an assault against communism in Europe. He saw it as a “Trojan Horse” designed to lure Germany and other countries into the capitalist web. ((Charles L. Mee, The Marshall Plan: The Launching of the Pax Americana (New York: Simon and Schuster, 1984).))

¶ 13 Leave a comment on paragraph 13 4 The European Recovery Program (ERP), popularly known as the Marshall Plan, pumped enormous sums of capital into Western Europe. From 1948 to 1952 the United States invested $13 billion toward reconstruction while simultaneously loosening trade barriers. To avoid the postwar chaos of World War I, the Marshall Plan was designed to rebuild Western Europe, open markets, and win European support for capitalist democracies. The Soviets countered with their rival Molotov Plan, a symbolic pledge of aid to Eastern Europe. Polish leader Józef Cyrankiewicz was rewarded with a five-year, $450 million trade agreement from Russia for boycotting the Marshall Plan. Stalin was jealous of Eastern Europe. When Czechoslovakia received $200 million in American assistance, Stalin summoned Czech foreign minister Jan Masaryk to Moscow. Masaryk later recounted that he “went to Moscow as the foreign minister of an independent sovereign state” but “returned as a lackey of the Soviet Government.” Stalin exercised ever tighter control over Soviet “satellite” countries in central and Eastern Europe. ((Melvyn P. Leffler and Odd Arne Westad, eds., The Cambridge History of the Cold War: Volume 1, Origins (Cambridge, MA: Cambridge University Press, 2010), 189.))

¶ 14 Leave a comment on paragraph 14 0 The situation in Germany meanwhile deteriorated. Berlin had been divided into communist and capitalist zones. In June 1948, when U.S., British, and French officials introduced a new currency, the Soviet Union initiated a ground blockade, cutting off rail and road access to West Berlin (landlocked within the Soviet occupation zone) to gain control over the entire city. The United States organized and coordinated a massive airlift that flew essential supplies into the beleaguered city for eleven months, until the Soviets lifted the blockade on May 12, 1949. Germany was officially broken in half. On May 23, the western half of the country was formally renamed the Federal Republic of Germany (FRG) and the eastern Soviet zone became the German Democratic Republic (GDR) later that fall. Berlin, which lay squarely within the GDR, was divided into two sections (and, from August 1961 until November 1989, famously separated by physical walls). ((Daniel F. Harrington, Berlin on the Brink: The Blockade, the Airlift, and the Early Cold War (Lexington: University of Kentucky Press, 2012).))