The wonder of the stock market permeated popular culture in the 1920s. Although it was released during the first year of the Great Depression, the 1930 film High Society Blues captured the speculative hope and prosperity of the previous decade. “I’m in the Market for You,” a popular musical number from the film, even used the stock market as a metaphor for love: You’re going up, up, up in my estimation, / I want a thousand shares of your caresses, too. / We’ll count the hugs and kisses, / When dividends are due, / Cause I’m in the market for you. But, just as the song was being recorded in 1929, the stock market reached the apex of its swift climb, crashed, and brought an abrupt end to the seeming prosperity of the “Roaring ‘20s.” The Great Depression had arrived, and with it, as the following sources chronicle, a rupturing of American life.

Americans elected a string of conservative Republicans to the presidency during the boom years of the 1920s. When the economy crashed in 1929, however, and the nation descended deeper into the Great Depression, voters abandoned the Republican Party and conservative politicians struggled to in office. In this speech on the eve of the 1932 election, Herbert Hoover warned against Franklin Roosevelt’s proposed New Deal.

Amid the economic indignities of the Great Depression, Huey P. Long of Louisiana championed an aggressive program of public spending and wealth redistribution. Critics denounced Long, who served as both governor and a senator from Louisiana, as a corrupt demagogue, but “the Kingfish” appealed to impoverished Louisianans and Americans wracked by joblessness and resentful of American economic inequality. He was assassinated before he could mount his independent bid for the White House in 1936. In the following extracts from two of his most famous speeches, Long outlines his political program.

In July 27, 1936, President Franklin Roosevelt accepted his re-nomination as the Democratic Party’s presidential choice. In his acceptance speech, Roosevelt laid out his understanding of what “freedom” and “tyranny” meant in an industrial democracy.

After winning a landslide victory in his 1936 quest for a second presidential term, President Franklin Roosevelt championed again the ambitious goals of his New Deal economic programs and their relationship to American democracy.

Lester Hunter left the Dust Bowl for the fields of California and wrote this poem, later turned into a song by migrant workers in California’s Farm Security Administration camps. The “C.I.O.” in the final line refers to the Congress of Industrial Unions, a powerful new industrial union founded in 1935.

Bertha McCall, general director of the National Travelers Aid Association, acquired a special knowledge of the massive displacement of individuals and families during the Great Depression. In 1940, McCall testified before the House of Representatives’ Select Committee to Investigate the Interstate Migration of Destitute Citizens on the nature of America’s internal migrants.

Amateur night at the Apollo Theater attracted not only Harlem’s African American population but a national radio audience. In this account, written through the New Deal’s Federal Writers’ Project, Dorothy West describes an amateur night at the theater in November 1938 and reflects on the relationship between entertainment, race, and American life. 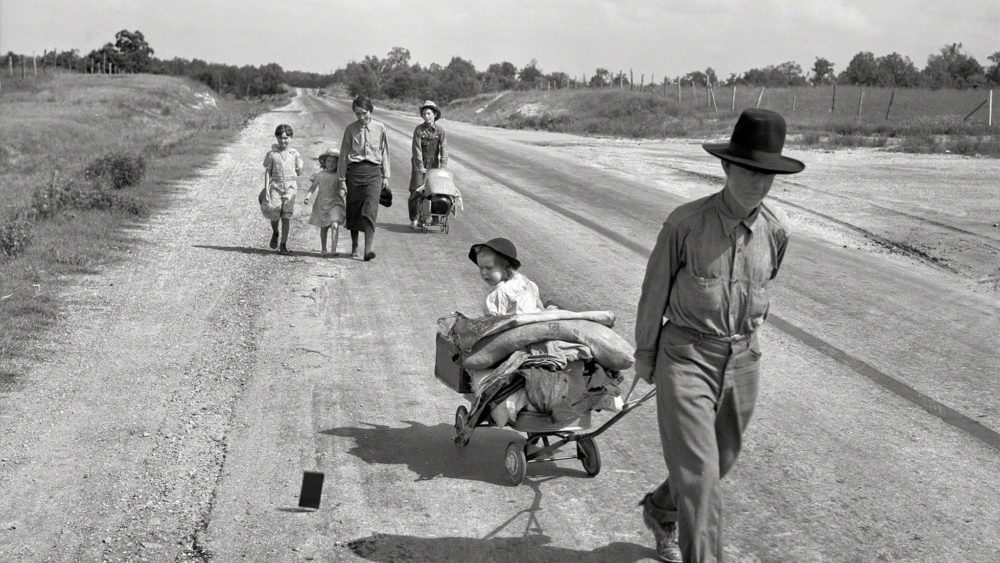 During her assignment as a photographer for the Works Progress Administration (WPA), Dorothea Lange documented the movement of migrant families forced from their homes by drought and economic depression. This family was in the process of traveling 124 miles by foot, across Oklahoma, because the father was unable to receive relief or WPA work of his own due to an illness.

This short newsreel clip made by British film company Pathé shows the federal government’s response to the thousands of WWI veterans who organized in Washington DC during the summer of 1932 to form what was called a “Bonus Army.” At the demand of attorney general, the marchers were violently removed from government property.