The American Civil War, the bloodiest in the nation’s history, resulted in approximately 750,000 deaths. The war touched the life of nearly every American as military mobilization reached levels never seen before or since. The vast majority of northerners went to war to preserve the Union, but the war ultimately transformed into a struggle to eradicate slavery. African Americans, both enslaved and free pressed the issue of emancipation and nurtured this transformation. Simultaneously, women thrust themselves into critical wartime roles while navigating a world without many men of military age. The Civil War was a defining event in the history of the United States and, for the Americans thrust into it, a wrenching one. The struggles and suffering of the Civil War endure through the words and images of the era.

1. Alexander Stephens on slavery and the Confederate constitution, 1861

Confederates had to quickly create not only a government but also a nation, including all of the cultural values required to foster patriotism. In this speech, Alexander Stephens, Vice President of the Confederacy, proclaims that slavery and white supremacy were not only the cause for secession but also the “cornerstone” of the Confederate nation.

Self-emancipation posed a dilemma for the Union military. Soldiers were forbidden to interfere with slavery or assist runaways, but many soldiers disobeyed the policy. In May 1861, General Benjamin F. Butler went over his superiors’ heads and began accepting fugitives who came to Fortress Monroe in Virginia. In order to avoid the issue of their’ freedom, Butler reasoned that these people were “contraband of war,” and he had as much a right to seize them as he did to seize enemy horses or cannons. Later that summer Congress affirmed Butler’s policy in the First Confiscation Act.

William Henry Singleton was born to his enslaved mother, Lettice, and her enslaver’s brother, William Singleton. At the age of four, he was sold away from his mother but ran back to her several times throughout his life. When the war broke out, he escaped to Union lines and volunteered for service. After being dismissed, he rallied one thousand Black soldiers and received a promotion as a sergeant.

5. Ambrose Bierce recalls his experience at the Battle of Shiloh, 1881

Civil War soldiers described the experience of combat as both terrifying and confusing. The American writer, Ambrose Bierce, captures both the confusion and terror of the Battle of Shiloh in the below excerpt of his 1881 recollections of the battle.

Music played an important role in the Civil War. Songs celebrated the cause, mourned the loss of life, and bound sings together in shared commitments to mutual sacrifice. These two songs, both written by women, one in the North and the other in the South, show the flexibility of Civil War music. The first is an example of the somber, sacralizing function of music, while the latter is an example of a lighthearted attempt at humor.

Abraham Lincoln offered a first draft of history in his second inaugural address, casting the Civil War as a war for union that later became a spiritual process of national penance for two hundred and fifty years of enslaving. Lincoln also looked to the future, envisioning a harmonious and speedy Reconstruction that would take place “with malice toward none” and “with charity for all.” 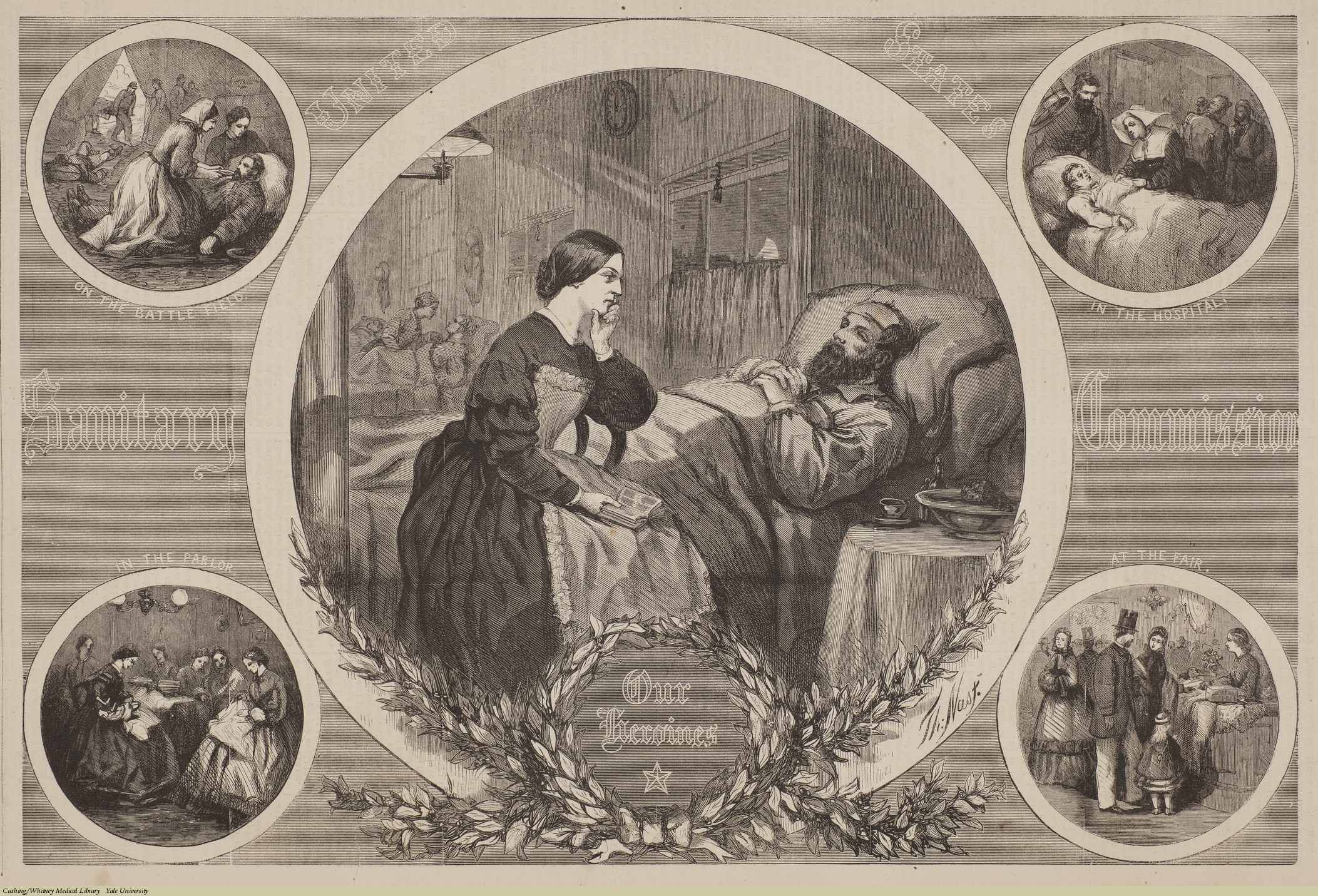 The Civil War ultimately opened a variety of arenas for Union and Confederate women’s participation.  In the North, the United States Sanitary Commission in particular centralized women’s opportunities to volunteer as nurses, donate supplies, and to raise funds at Sanitary Fairs.  This 1864 image from popular periodical Harper’s Weekly celebrates women’s contributions on the battlefield, in the hospital, in the parlor, and at the fair.

Death pervaded every aspect of life during the years of the Civil War. This gruesome photograph, taken after the battle of Cold Harbor, shows the hasty burial procedures used to reckon with unprecedented death. Dirty jobs like this were often left to Black soldiers or freedpeople in Contraband Camps.