1. Boston trader Sarah Knight on her travels in Connecticut, 1704

Sarah Knight traveled from her home in Massachusetts to trade goods. Through her diary, we can get a sense of life during the consumer revolution, as well as some of the prejudices and inequalities that shaped life in eighteenth-century New England.

Eliza Lucas was born into a moderately wealthy family in South Carolina. Throughout her life she shrewdly managed her money and greatly added to her family’s wealth. These two letters from an unusually intelligent financial manager offer a glimpse into the commercial revolution and social worlds of the early eighteenth century.

Jonathan Edwards catalyzed the revivals known as the Great Awakening. While Edwards was not the most prolific revivalist of the era—that honor belonged to George Whitefield—he did deliver the most famous sermon of the eighteenth century, commonly called “Sinners in the Hands of Angry God.” This excerpt is drawn from the final portion of the sermon, known as the application, where hearers were called to take action.

Samson Occom was raised with the traditional spirituality of his Mohegan parents but converted to Christianity during the Great Awakening. He then studied for the ministry and became a missionary, minister, and teacher on Long Island, New York. Despite his successful ministry, Occom struggled to receive the same level of support as white missionaries.

Gibson Clough enlisted in the militia during the Seven Years War. His diary shows the experience of soldiers in the conflict, but also reveals the brutal discipline of the British regular army. Soldiers like Clough ended their term of service with pride in their role defending the glory of Britain but also suspicion of the rigid British military.

Pontiac, an Ottawa war chief, drew on the teachings of the prophet Neolin to rally resistance to European powers. This passage includes Neolin’s call that Native Americans abandon ways of life adapted after contact with Europeans.

7. Alibamo Mingo, Choctaw leader, reflects on the British and French, 1765

The end of the Seven Years War brought shockwaves throughout Native American communities. With the French removed from North America, their former Native American allies were forced to adapt quickly. In this document, a Choctaw leader expresses his concern over the new political reality.

Blueprint and photograph of Christ Church

Religion played an important role in each of the British colonies – for different reasons. In Virginia, the Anglican church was the official religion of the colonial government and colonists had to attend or be fined, so churches like Christ Church became important sites for political, economic, and social activity that reinforced the dominance of the planter elite. Robert “King” Carter built this church on the site of an earlier one built by his father. The Carter tombs belong to Robert Carter and his first and second wives. The colonial road that stopped at the door of the church went directly to the Carter family estate. Pews corresponded with social status: the highest ranking member of the gentry sat in the pew before the altar, across from the pulpit. Poor whites sat at the back, and enslaved men and women who came to church would have stood or taken the seats closest to the door – cold in winter, hot in summer, and farthest from the preacher. Many churches eventually built separate gallery seating for the enslaved who attended services. These churches were criticized during the Great Awakening, particularly by Baptists, who preached the equality of souls and felt the Anglican church was lacking in religiosity. 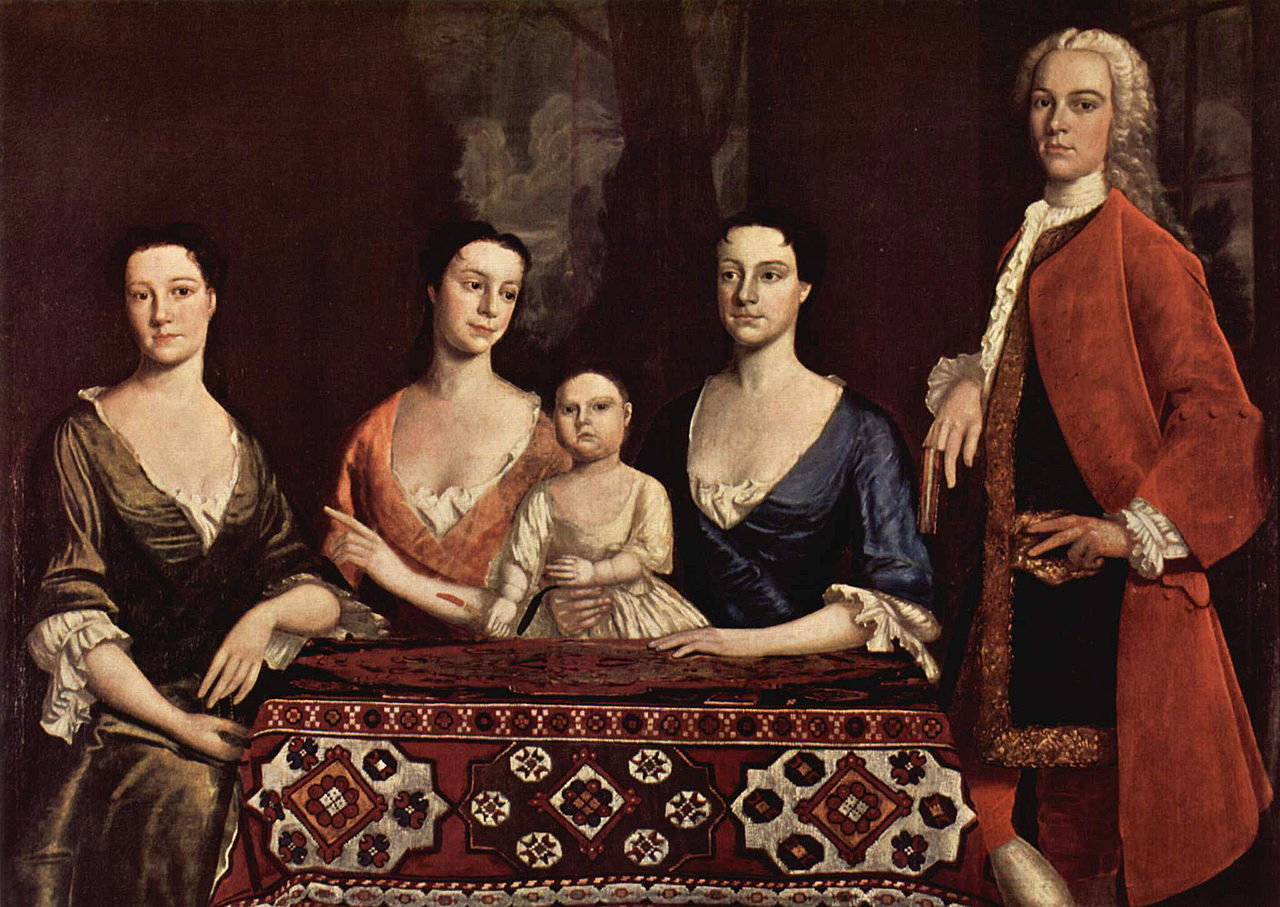 Colonial elites used clothing, houses, portraits, furniture, and manners to participate in a culture of gentility that they believed placed them on an equal footing with elites in England. Robert Feke’s 1741 portrait of the Royall family portrays Isaac Royall Jr. at age 22, just two years after he inherited his father’s estate, including the family mansion outside Boston, a sugar plantation on Antigua, and eighteen enslaved African Americans, which helped him become one of the wealthiest men in the colony of Massachusetts. He married Elizabeth McIntosh (wearing blue), aged fifteen at the time of her marriage in 1738, confirming his position among the colonial elite. Their eight-month-old daughter, Elizabeth, holds a coral teething stick with a gold and ivory handle (coral was traditionally believed to ward off evil spirits). Also pictured is Penelope Royall Vassall, Isaac’s sister who married a Jamaican planter, and his sister-in-law, Mary McIntosh Palmer. Mary Palmer’s pointed finger and Isaac Royall’s hand on his hip were poses drawn from other major artistic works and were intended to convey their ease and refinement, while their silken clothes communicated wealth.