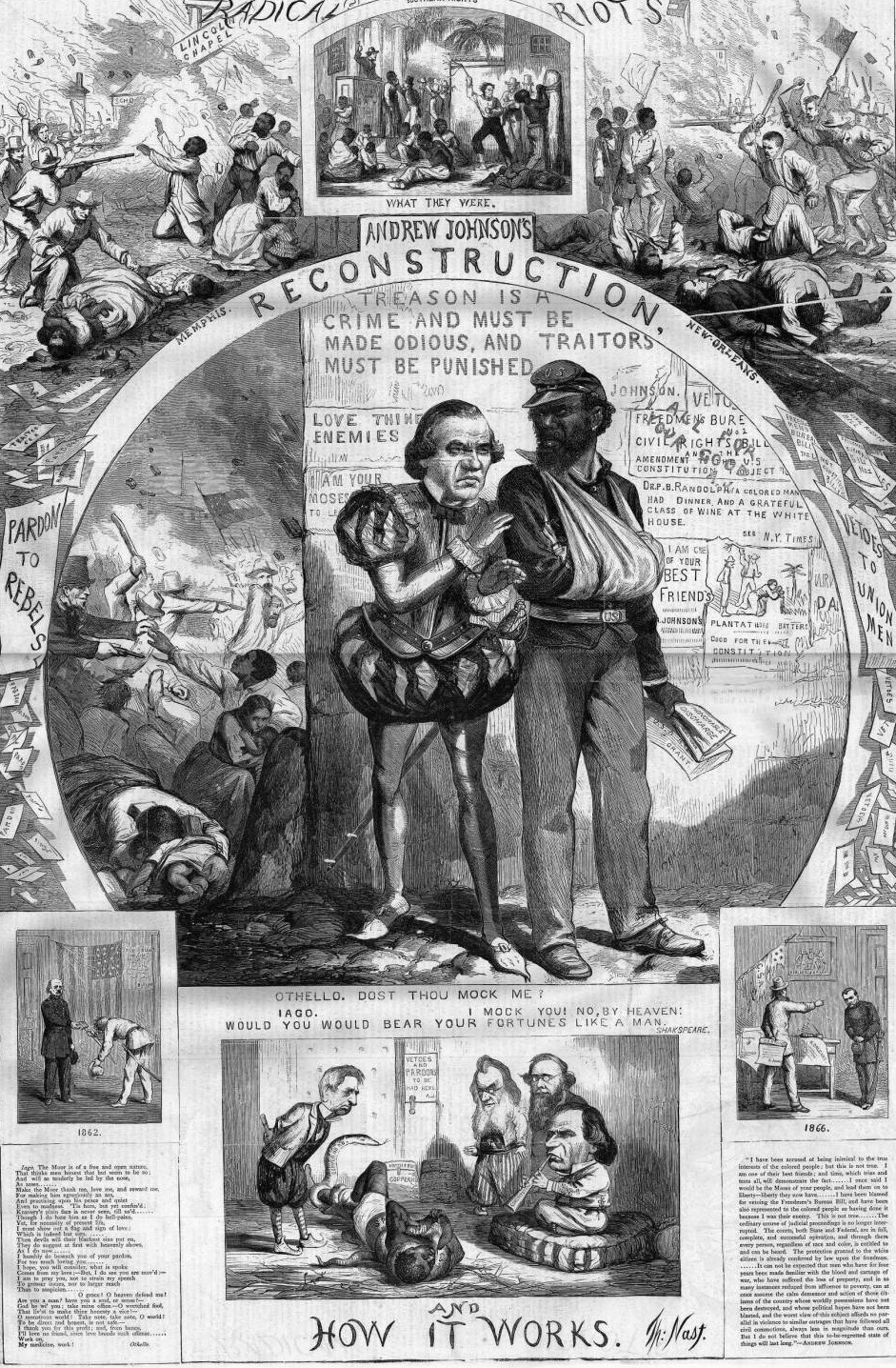 Thomas Nast, “Reconstruction and How It Works,” Harper’s Weekly, 1866, via HarpWeek.

This print mocks Reconstruction by making several allusions to Shakespeare. The center illustration shows a Black soldier as Othello and President Andrew Johnson as Iago. Johnson’s slogans “Treason is a crime and must be made odious” and “I am your Moses” are on the wall. The top left shows a riot in Memphis and at the top a riot in New Orleans. At the bottom, Johnson is trying to charm a Confederate Copperhead. General Benjamin Butler is at the bottom left, accepting the Confederate surrender of New Orleans in 1862. This scene is contrasted to the bottom right where General Philips Sheridan bows to Louisiana Attorney General Andrew Herron in 1866, implying a defeat for Reconstruction. Click on the image for more information.

Iago. The Moor is of a free and open nature,
That thinks men honest that but seem to be so;
And will as tenderly be led by the nose,
As asses…
Make the Moor thank me, love me, and reward me,
For making him egregiously an ass,
And practicing upon his peace and quiet
Even to madness. ‘Tis here, but yet confus’d;
Knavery’s plain face is never seen, till us’d…
Though I do hate him as I do hell-pains,
Yet, for necessity of present life,
I must show out a flag and sign of love;
Which is indeed but sign…
Then devils will their blackest sins put on,
They do suggest at first with heavenly shows,
As I do now…
I humbly do beseech you of your pardon,
For too much loving you…
I hope, you will consider, what is spoke
Comes from my love;–But, I do see you are mov’d:–
I am to pray you, not to strain my speech
To grosser issues, nor to larger reach
Than to suspicion…

Are you a man? Have you a soul, or sense?–
God be wi’ you; take mine office.–O wretched fool,
That liv’st to make thine honesty a vice!–
O monstrous world! Take note, take note, O world!
To be direct and honest, is not safe.–
I thank you for this profit; and, from hence,
I’ll love no friend, since love breeds such offense…
Work on,
My medicine, work!

“I have been accused of being inimical to the true interests of the colored people’ but this is not true. I am one of their best friends; and time, which tries and tests all, will demonstrate the fact…I once said I would be the Moses of your people, and lead them on to liberty–liberty they now have…I have been blamed for vetoing the Freedmen’s Bureau Bill, and have been also represented to the colored people as having done it because I was their enemy. This is not true…The ordinary course of judicial proceedings is no longer interrupted. The courts, both State and Federal, are in full, complete, and successful operation, and through them every person, regardless of race and color, is entitled to and can be hear. The protection granted to the white citizen is already conferred by law upon the freedman….It can not be expected that men who have for four years been made familiar with the blood and carnage of war, who have suffered the loss of property, and in so many instances reduced from affluence to poverty, can at once assume the calm demeanor and action of those citizens of the country whose worldly possessions have not been destroyed, and whose political hopes have not been blasted, and the worst view of this subject affords no parallel in violence to similar outrages that have followed all civil commotions, always less in magnitude than ours. But I do not believe that this to-be-regretted state of things will last long.”– Andrew Johnson.